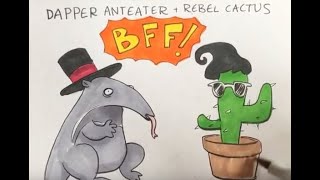 In case these flew under your radar:

-I participated in Inktober again this year! My theme was "songs about characters"; each song title had to contain the name of the character that the song was about. I tried to avoid songs about real people, and alternated between male/female characters. Some were inspired by the lyrics in context, others are... dumb literal interpretations of isolated lines. The result can be found on my Instagram (or the Cartoons tab), here's a playlist of all the songs used.

-I worked with author Rosetta Johnson to illustrate a children's book inspired by her granddaughter, the paperback book can be purchased here.

-Some little things as far as exhibiting work:

-Displayed and sold comics at Scranton Zine Fest in June

auctioned off to benefit WFMU, a radio station you should listen to and support.

-Not exhibiting related per se, but been teaching kids/teens classes on comics, which

has been an absolute blast.

Have a lovely day!